“Share your knowledge, your wisdom, your passion, your experiences. Make a difference. Everyone is fascinating in their own way.” –Justin Cotillard

Those of you who know me well are aware of the fact that I am absolutely fascinated with life! I have many interests that I am passionate in pursuing and sharing with others. I’d like to tell you about my “life journey” with one of those interests today.

I consider myself fortunate to have grown up during the time that America was first reaching for the stars. I watched with great interest all the Mercury, Gemini, and Apollo missions. I remember watching Neil Armstrong step on to another world—Earth’s Moon—in July of 1969.

During this same period, I watched Buck Rogers and Flash Gordon on our black and white TV. I dreamed of worlds with advanced civilizations with the ability to travel among the stars.

When I turned 12 years old, my parents gave me a Tasco refracting telescope with a two-inch objective. I couldn’t wait to get out under the stars with my new telescope. I will never forget the first time I pointed my telescope toward the moon and sharpened the focus. “Wow!” I thought. I could actually see the mountain ranges and vast craters in great detail. “First light” with that tiny telescope was the beginning of a life-long passion for the heavens.

I checked out and read all the astronomy books in the library—I literally couldn’t get enough. I soaked up the information like a sponge. Soon, I wanted a “serious,” amateur telescope—the kind they referred to in all of the books and magazines I was reading. I saved my money and purchased a Criterion RV6 Dynascope (6-inch Newtonian Reflector) with a clock drive to compensate for Earth’s rotation and keep objects centered in the eyepiece. I learned how to navigate the night sky with that scope, and then I moved up to a Meade Schmidt-Cassegrain with an 8-inch mirror.

I would often set up my scopes in our front yard. This inevitably attracted the attention of those in my neighborhood—young and old. As they would stop by for a look at whatever I was viewing, they would ask me questions. I discovered how much fun it was to share my telescope views with others and teach them about the universe—it was more fun than observing alone, and my joy was multiplied many times! I never got tired of watching the reactions of people as they viewed the rings of Saturn or a far-away galaxy for the first time—even adults would react with child-like wonder and excitement. (I still enjoy watching people’s reactions.)

As my knowledge expanded and my reputation spread, groups started asking me to come and speak to them about the universe and show them notable objects through my telescope.

One day, a group at the University of Utah invited me to speak. As I conducted my slide show, one young lady kept asking me questions—very thought-provoking questions. Afterwards, as I was showing the group objects through my telescope, this young lady kept her questions coming. I was so taken by her interest in astronomy (and me) that I asked my host for her phone number and called her. I later married that young lady and she has been my star-gazing partner ever since.

Over the years, I have conducted many “star parties” for various groups in the community. Companies have even paid me to come to summer, employee retreats to deliver my slide shows and show them the objects I discussed through my telescopes. 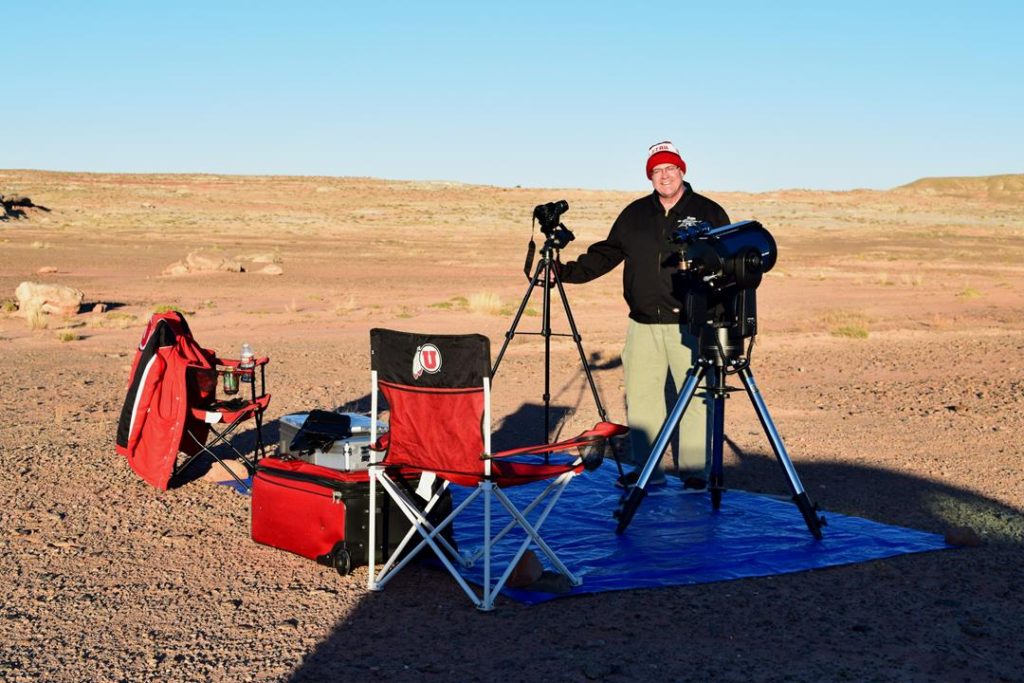 I’ve also had some very strange experiences stargazing over the years. For example, one evening I was conducting a star party for a group of about 20 people at a campsite 9,500 feet up in Utah’s Uintah Mountains. I had just showed the group Saturn and was orienting my telescope toward an impressive star cluster in deep space. While I was doing this, people in the group were admiring the awesome view of the Milky Way—our home galaxy.

Suddenly, people started talking about some objects that were moving across the sky. I ignored the chatter, because I was concentrating on the operation of my scope. Finally, the group interrupted me and asked, “What are those five objects coming from different parts of the sky toward a common point?” I stepped away from my scope to see what they were referring to. Sure enough, there were five objects, which looked like satellites, coming from different parts of the sky and moving toward a common point. We all watched—you could have heard a pin drop. As the objects reached the central point, at the exact same time, they all disappeared—poof! Everyone turned to me and asked, “What were those objects?” I explained that we have a term for such phenomena: Unidentified Flying Objects (UFOs). Over the years, I have seen many curious things in the night sky.

When I complete such star parties, and everyone has retired for the night, I often stay up for an additional 2-3 hours—just me and the great vault of the heavens with its myriad stars. As I enjoy those hours of uninterrupted viewing and astrophotography in the quiet of the night, I feel incredibly peaceful and at one with all of creation.

These images were taken in 1989 on film. The “North American Nebula” is on the left, and the center of our galaxy, The Milky Way, is on the right.

People often ask me, “Don’t you get scared—being alone in the blackness of the night for so many hours?” I assure them that I do not. In fact, I think Sarah Williams described my feelings better than I can in her wonderful poem, “The Old Astronomer.” The second half of the fourth stanza reads:

“I have loved the stars too fondly to be fearful of the night.”

A few years back, I felt honored to be asked to teach a semester-long course on astronomy at the University of Utah’s Osher Institute for Lifelong Learning. I titled my course, “The Marvels and Mysteries of Our Universe.” The highlight (for me) was treating my class to a night under the stars with my 16-inch telescope. 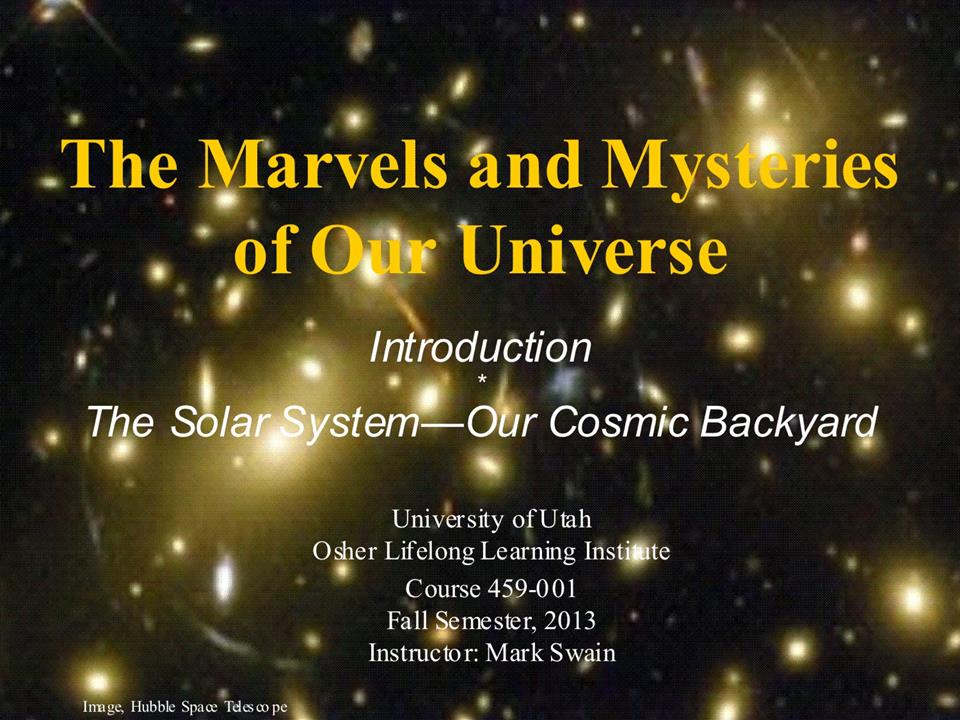 In August of 2017, my wife and I invited two of our dear friends to travel to Wyoming with us to view the total solar eclipse. We picked a place out in the middle of nowhere right in the middle of the path of totality. As we were setting up our camp we were quickly joined by a couple from Germany, then a family from Australia, then… Soon, we had a small community of friends with which to enjoy one of nature’s most awe-inspiring spectacles. I will never forget the gorgeous, “dancing” tendrils of light that I viewed during totality. It was one of the most beautiful things I have ever seen.

In September of 2017, my wife and I hosted a BBQ and star party at our home. After dinner, I opened up my home observatory for a night of viewing. After I oriented my telescope on the moon, I invited attendees—young and old—to put their cell phones up to the eyepiece and take pictures. I’ve never seen so much excitement!  As people looked at the pictures they had taken, I could see the pride they felt in having taken an astrophotograph. Who can say what latent interests in astronomy were awakened that evening…

During my years on this marvelous planet, my life has been enriched in incredible ways by sharing my many interests with others—including my interest in astronomy. I have learned—time and time again—that whenever I introduce a person to one of my interests, my joys are multiplied and my excitement and passion are renewed. It’s like discovering things all over again!

I challenge each of us to look for opportunities to share our interests—the things we love most—with others. In so doing, we will enrich the lives of those we come in contact with, and we will experience great joy in doing so.

Through his company, Daily Renaissance, LLC, Mark offers both a workshop and a speech on “How to Become Your Best Self.”

2 thoughts on “Share What You Love Most with Others”