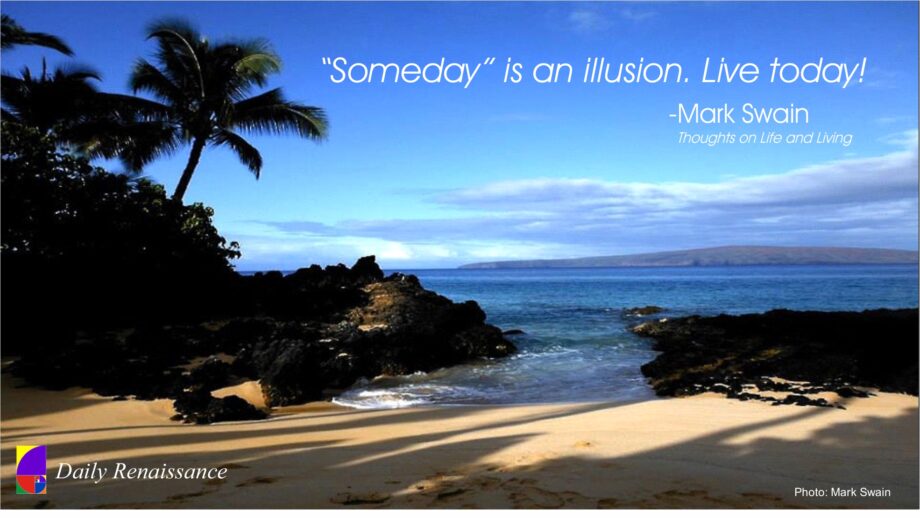 During my many years as a career/life coach, I have heard, “Someday, I am going to…” more times than I care to recall.

Shortly after noon on August 24th A.D. 79, while 20,000 people in the Roman town of Pompeii were enjoying their daily meal, Mount Vesuvius violently erupted sending a gigantic plume of gas, rock, and ash into the blue sky. Vesuvius eventually unleashed a deadly pyroclastic flow, which destroyed all life in its path. The once beautiful city of Pompeii was now covered in eight meters of rock and ash.

When the residents of Pompeii awoke on that fateful, August morning almost 2,000 years ago, probably none realized they were living their final day on Earth—but they were.

On the morning of August 22, 1970, I awoke with intentions of enjoying the last few days of summer before the start of a new school year (I was 14). My day did not go as planned. We received a call from my grandmother informing us that my grandfather had passed from acute sepsis. He was 62. I wept.

My grandfather was an engineer who worked on classified projects for the government. He was a very dedicated, conscientious, and award-winning employee, and he rarely took time off from work—even for vacations. He saved up his days off for “someday.”

Grandpa had been looking forward to retiring in the near future. He had purchased a new car for all the travel he and my grandmother had planned to do. He had purchased fishing tackle and art supplies. He had purchased a set of the “Harvard Classics,” so he could digest the wisdom of the ages. My mother remembers her dad telling her time and time again, “When I retire, I’ll never be bored. I have so many things I want to read.” My grandfather thought he had many years of retirement, just ahead, during which time he would do all the many things he had put off enjoying until “someday.”

My grandfather’s sudden death made a tremendous impact on my young life—and taught me a priceless lesson. I determined that I would not put off the many things I enjoyed doing and wanted to pursue until “someday.” Rather, I would do my best to enjoy my many interests and passions along the way by striving for balance in my life. I am happy to report, that I have been faithful to my youthful commitment to live a balanced life.

In my work as a coach, I have discovered that many people approach life as though they will live forever on this planet. They get caught up in the day-to-day grind of existence and put off their most cherished dreams for “someday.” I have sadly observed that “someday” never comes for many people. They wake up one fateful day to discover that their lives have passed by like a dream, and they have no time or energy left to do the things they had planned on doing “someday.” “Carpe Diem!” is my perennial advice to all those I work with.

When Pompeii was excavated in modern times, some wise advice was found engraved on a wall of a public building: “Enjoy life while you have it, for tomorrow is uncertain.”