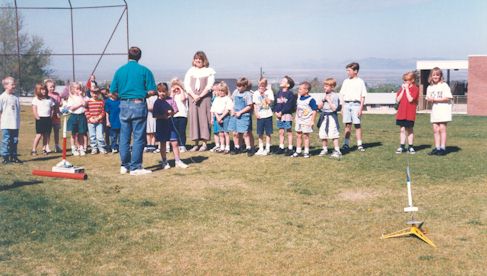 Mark grew up during the “space race.” He watched with fascination each of the Mercury, Gemini, and Apollo Missions. When he was in the 5th Grade, he and some fellow students put together an elaborate presentation on the Apollo program and were invited to present it to the public in Salt Lake City. Mark studied all he could find on the space program. One of his heroes is Dr. Wernher von Braun, the “Father” of the Saturn V Rocket that took us to the moon. The Saturn V is still the most powerful machine ever built by man. It developed 7.5 million pounds of thrust!

When Mark attended a Space Camp at Weber State University as a Boy Scout, he had the opportunity to work on three merit badges. One of those, Space Exploration, gave him an opportunity to build and launch an Estes Rocket. Mark immediately developed an interest in these little rockets. Since then, he has designed and flown many his own designs. He has participated in the international rocketry event, “Hell Fire,” held annually on the Bonneville Salt Flats near Wendover, Utah.

Over the years, Mark has spent many enjoyable hours sharing his interest in rocketry with family, friends, and students. The picture was taken during a session Mark conducted with a group of fourth graders.